Hanon are one of the most experienced retailers when it comes to collaborating with the brands, and their most recent creation, the adidas Consortium x Hanon CNTR is as good as any we’ve seen to date.

The colourway and materials pay homage to the Stores home city of Aberdeen, also known as ‘The Granite City’ – in reference to the east coast of Scotlands main export right up until the early ’70s. Now, with the success of the family run business, we’re thinking the cities number one commodity has to be premium streetwear and trainers, and all from one of the industries most established retailers.

The shoe, which some will know as the Centaur (renamed due to some legal issues regarding the trademark) is finished to the highest standards and with all the additional attention to detail, you’ll feel like your purchasing more of a package, rather than just a pair. The materials consist of the best suede, mesh and nubuck and the accents and attention to detail on the branding, show us just how much care both Hanon and the Consortium team take over their collaborative efforts.

There’s three sets of laces, multi-print sock liners, black 3M reflective stripes that have been treated to mirror the image of the stonework at their warehouse and a special edition ‘Granite’ t-shirt that will be available to the first 50 customers that make the trip to the store on the drop date.

The adidas Consortium x Hanon CNTR drops in-store only on Saturday 26.1.13 with Hanon, No.6 London and No.74 Berlin, with other UK Consortium retailers making them available seven days later.

We’ll have the confirmed list of UK Consortium Stockists for the second drop up on our HEADS UP page shortly, but for now, take a look at the short video that shows off the undeniable beauty of the shoe, in the surrounds of its city of origin. 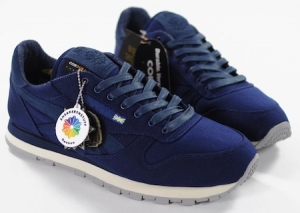