With some brands beginning to run out of steam in their retro runner archive, tennis shoes appear to be a strong candidate to become the next hype thing. This will be music to the ears of the good folks over at ADIDAS, as they have arguably the best back catalogue of tennis shoes in the business – and with their latest release they could win the debate before other brands have even started, as they bring back an absolute cult classic – the ADIDAS EDBERG ’86, in both OG and Wimbledon forms.

When it comes to bringing back the Edberg, adidas served up dessert first in the form of last month’s Footpatrol collaboration that paid homage to everyone’s favourite Wimbledon dairy/fruit combo. But for those still hungry here comes the main course – and it’s a meaty one! First up is the mighty OG model. adidas heads worldwide have been sobbing into their crumbly old 80’s pairs for years waiting for a re-release of these, and rightly so. The signature gold and green textured stripes on that chunky basketball/training inspired silhouette set both the grass courts and streets on fire back in ’1986 when Stefan Edberg first broke them out, and they’ve remained massively sought-after ever since. Whilst these versions sport a couple of minor changes to the toe perforations and tongue label, they’re very close to the originals, and built in the same soft garment leather that we saw on the recent Stan Smith re-release – but most importantly that original Juniper/Sunburst colourway is bang on – classic white, grey sole details, just the right amount of fresh lawn green, with the whole scheme punctuated by those mustardy hits of sunburst. For the Wimbledon editions, things get tonal, with the upper totally decked out in a plush dark purple suede, with quality leather side stripes and lining providing some contrasting texture. The clean white and grey sole unit and a single white eyelet breaks things up, while the lone colour pop comes from the dark green of the tongue tag, which completes the tie-in with the traditional All England Club colour scheme. This is a subtly themed pair which is definitely more baller than ball boy, and acts as the perfectly restrained opposite to the more lairy but equally well-executed Footpatrol pair. With this set of shoes, the brand with the three stripes has definitely served an ace, and look to have the mixed doubles championship at match point. We could keep on with the bad tennis puns, but the shoes are good enough to let the pictures do the talking!

The ADIDAS EDBERG ’86 OG & WIMBLEDON editions are set to release at the beginning of August, and we’ll have the RELEASE PAGES up in plenty of time. If you’re not already then remember to follow us for updates, by simply clicking on the icons in the social bar below, and for updates straight to your inbox, you can sign-up to our new weekly newsletter, too. 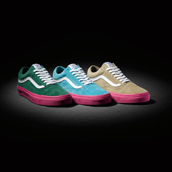