A teaser image for these did the rounds a while ago but finally we get to see some better images of the ADIDAS ORIGINALS X BAIT EQT RUNNING SUPPORT – THE BIG APPLE.

Taking inspiration from various aspects of New York has resulted in a very distinct and unusual colour combination, but one that works really well together and looks great. The predominantly frost mint and viridian green upper takes its colours from the Statue Of Liberty, whilst the red pops on the heel, logo and lacelocks come from the city’s nickname THE BIG APPLE. Black and white are used to add contrast and tone down the overall look, but to keep things different, the colours are reversed on the stripes and midsole. BAIT keep the cool touches coming with black and red speckling on the midsole and ‘Superior’ on the lace tag; which comes from their motto of providing “Superior Quality Goods”. All of the colours and little design elements combine to create a real head turner of a shoe – and we have no doubt this release will be a big success.

So far, all we know is that the ADIDAS ORIGINALS X BAIT EQT RUNNING SUPPORT – THE BIG APPLE will be releasing at BAIT on SATURDAY 31ST JANUARY 2015: as soon as we hear anything about an EU release, we will have all the info up on our RELEASE PAGE. Keep checking back for the latest status updates! 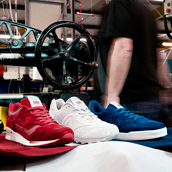