We’re not going to pretend that we remember the adidas Torsion Allegra (or its predecessor, the Allegra S) from its 1994 release date, but we will definitely confirm our love for these new retros that showed up at the start of 2013.

We’ve had some time to sit and digest the Torsion Allegra and whilst the colourways were bound to appeal, we’ve realised that under the cosmetic shell, there’s a great piece of footwear sitting beneath. Firstly, they’re light. Lighter than the layered panels might suggest, which is a nice surprise. The neoprene sockliner makes for a snug fit – snugger than most other running shoes around at the moment – but where many of the current athletic silhouettes have gone for the barefoot feel, these feel more sturdy underfoot. The Torsion Bar serves its purpose well, allowing independent motion of the heel and forefoot, but take the functional aspect aside and you’ve got a great looking component embedded into the sole. The bright neon salmon bar on the silver pair looks great, but turn to the black pair to see the first camo Torsion bar we’ve spotted yet! It’s going to take a lot of leg flourishing to show that part of the shoe off, but we’re backing it. And on that note, let’s go back to the reason we picked this shoe out in the first place: the colours. Whoever was responsible for these two make-ups did a cracking job. Camouflage is used by every shoe brand, but seeing it applied as a detail rather than a full-on surface coating looks tasteful and classy. If you’re looking for something a bit smarter, then the black and camo Torsion Allegra ticks the box. But sometimes you want to go for the always-popular neck snap – and that’s where the silver, coral and navy on the other pair comes in. A dark petrol blue works really well with the coral panel, whilst a speckled midsole is always going to win the most sour faced sceptic over. We loved the Solebox version that dropped at Christmas, but these two follow-up colourways are just as good. In a wave of exciting releases from our friends at adidas, the Torsion Allegra is sitting right at the crest, so make sure you pick these up before they disappear from the shelves for good. 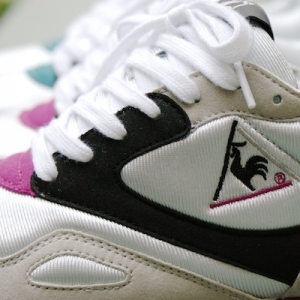