ASICS have decked out three of their most popular silhouettes in festive colours in the lead up to the holiday season. The forthcoming CHRISTMAS PACK includes a GT-II, a GEL SAGA, and of course the highly sought-after GEL-LYTE III. The theme has been thoroughly executed, conceptualising different Christmas characters – Elves, Rudolph and Santa – in the three models and they are scheduled to drop this SATURDAY 16.11.13.

As is standard for trainer releases nowadays, the character that each shoe encapsulates also serves as its nickname, so with that in mind weʼll start with the ASICS GEL SAGA ʻRudolphsʼ. Asics have done a good job replicating the reindeerʼs hide on the upper, alternating a pale perforated suede with darker beige overlays. Antlers are depicted by the brown leather Asics stripes on the midsection, with Rudolphʼs iconic red nose represented by the outsole, eyelets and tongue branding. Common denominators of all 3 makeups are the white midsole and metallic gold sockliner, which link the pack together nicely. The ASICS GEL-LYTE III is garbed in Saint Nickʼs trademark red and white, with the upper coated in scarlet suede, with perforations on the toebox and midsection. Pale grey and white hits appear on the stripes, heel branding, toebox accents and eyelets, while the red outsole sandwiches the white midsole nicely. The waxy green leather on the ASICS GT-II seems to evoke the image of a Christmas fir tree rather than an elf, but maybe thatʼs just us. While the GT-II is probably the least popular of the 3 models, the ʻElvesʼ definitely threaten to steal the show here. The Xmas Pack formula persists with this makeup: perforations on the toe and midsection, white stripes on the midsection and well-placed hits of red all over. A black outsole and heel tab finishes the shoe off very cleanly. Being leather rather than suede, these are certainly the most wearable of the three for the winter months. The ASICS CHRISTMAS PACK, consisting of the GEL SAGA, GEL-LYTE III and GT-II is scheduled to drop on SATURDAY 16.11.13 at 00:00hrs and can be found via the link-through below. 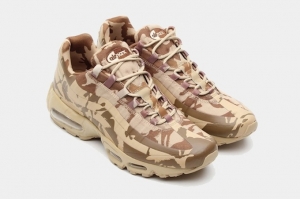 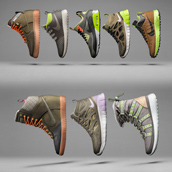