The story of the iris dates back to Ancient Greece where the Greek Goddess Iris, the Goddess of the Rainbow, acted as the messenger between heaven and earth. Like the flower that inspires the shoe, the silhouette plays with a palette of purples; two low-saturation shades of the colour in a brushed micro-perforated suede which mimics the gradient on the flower petals. Accents of yellow feature on the leather sockliner and outsole, alongside hints of tonal reflective 3M on the heel and the toe box. The colour blocking mirrors the first release and we have to say this is a great tribute to the 25th anniversary of the shoe designed by Shigeyuki Mitsui back in 1990.

The ASICS TIGER X SIZE? GEL LYTE III IRIS is scheduled to drop on FRIDAY 20 MARCH and will be available via our RELEASE PAGE. 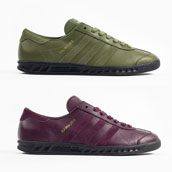