Following on from the success of Kenny Anderson’s first signature skate shoe with CONVERSE, the CONS KA ONE, this week sees the release of the brand ambassadors next weapon of choice, the CONS KA-II.

It’s no secret that Nike own Converse and it’s no secret that Nike are at the forefront of the technological charge in footwear since the turn of the decade, a great deal of which we’ve already seen in the signature models from their elite duo of P-Rod and Koston. So it’s logicial that the KA-II follows suit, and now boasts the Nike lunarlon sockliner (or insole to us english) along with a memory foam and gusseted tongue to customise the fit around the foot. The upper is made up of a one piece solid suede, broken only by the cut out for the Star Chevron branding and the collar support is fitted out with a flexible nylon mesh, whilst the sole unit sees the All Star Rubber fused outsole paired with the Flex Rubber cup sole to give the shoe its support and durability.

We haven’t had a chance to put a pair to the test as yet so can’t really comment on how they skate, but if they get the thumbs up from Kenny, then they’re alright with us. Available in four colourways, Red, Grey, Blue and Black, the CONVERSE CONS KA-II has started to drop in the UK and can be found via the link-through at the foot of the post. 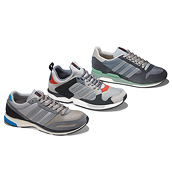