This past weekend marked the culmination of four months of anticipation, hard work, and a whole load of pocket money saving as CREPE CITY came around once again.

This event saw the CC team reach an impressive milestone: it was the tenth edition of the trainer exchange and festival, confirming it as an institution and foundation of the UK  scene. It seems that the throng of customers desperate to gain entry and splash cash grows exponentially with each event and as such the space has expanded accordingly. Now spread across two floors of the Old Truman Brewery, there was plenty of room to check out everything on offer, but most importantly that previously perpetually static queue moved swiftly along.

The hugely diverse mix of enthusiasts is always a feature of Crepe City; it was good to see some of the old Crooked Tongues forum regulars stall-to-stall with those newer heads for whom a message board is akin to a vinyl record. It’s not geographically exclusive either: plenty made the trip from far and wide to represent at the London-based event–shouts to the Hanon contingent for making it down and the Wellgosh crew, whose stall brought the heat once again!

There was a great deal else to go along with the main attraction of buying and selling, with stalls devoted to all manner of trainer-related accessories. Jason Markk and Sneaky Wipes were on hand to demonstrate their products, while Stance socks and Ropes Laces decked out their stalls with every variety under the sun. Liquiproof were out in force, the nanotech demonstrations dropping jaws as they poured anything and everything over some serious heat to show just how good their product is. The art contingent was strong, with Steve Piantoni, Fil Fury and Carroll Lynn all peddling their wares. Crepe City mainstays U-Dox were giving everyone an interactive look at their new publication – Sneakers: The Complete Limited Editions Guide – by displaying some super rare pairs alongside the corresponding entry in the book. With an uncanny resemblance to the Louvre’s version, PUMA had set up a glass Trinomic pyramid as a centrepiece to the lower floor to give us a taste of what’s to come–definitely some releases to get excited about! The real pièce de résistance though was the adidas Flux showcase that was opened around the corner in conjunction with the event. Curated by the legend and Three Stripes-obsessive Robert Brooks, the space offered a visual timeline of the progression (or regression however you look at it) from older silhouettes to the Flux, showing how they have fed into adidas’ newest model. Not to mention it gave you a chance to purchase the Photo Print pack that released the same day!

Huge thanks and props to Ron, Morgan, and the rest of the Crepe City team, and to everyone who helped make the day as dope as it was. Be sure to check out the rest of the photoset via the link-through below. 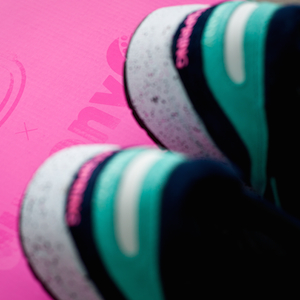 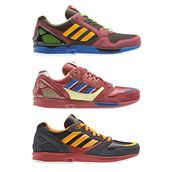