The CREPE CITY team promised that the fifth anniversary event would be the biggest one yet and they really weren’t lying. CC12 can only be described as huge and we’re still not entirely sure we managed to see everything. It was clear to see however that Team CC had been working really hard to make sure that everyone who attended had their needs catered to.

The queue seems to get longer at each event and this time was no different; we even spotted some camping chairs, which shows some real dedication to the cause. The much larger location however allowed for the queue to move at a good pace, with a constant flow of people streaming through the door even hours after opening. The usual diverse mix of people that we have become accustomed to was just as apparent today as it has always been, with people barely into theirs teens rubbing shoulders with those who have been collecting since before the aforementioned were even born. It is one of the things that makes Crepe City what it is, and something we enjoy seeing as it brings both ends of the cultural spectrum together in one place.

Variety could also be seen among the trainers for sale at the event, so no matter which brand you were looking for or how much money you had been able to scrape together there was a little bit of something for everybody. The ladies even had their own section catering just to them; with a few private sellers and the first attendance from the Dutch store NO BOYS ALLOWED. The rest of the halls had everything from groups of friends getting together to sell off a few pairs from their collections through to stores such as SOLE HEAVEN and WELLGOSH.

PUMA and K-SWISS were there showing some of their upcoming releases and a glimpse at their archives respectively. It is nice to see the brands getting on board and showing some appreciation for the culture that they play a big part in creating. We expect to see some great stuff coming from both brands next year.

It is no secret that the Huarache is currently the trainer of choice for many, so it seemed only natural that a few guys would get together and create a display of 50 pairs for all of us to enjoy. With less than a handful of the well known colourways missing from the display it really was an impressive sight.

Trainer related accessories were also well catered for, with JASON MARKK, LIQUIPROOF and SNEAKY WIPES all showing their trainer protecting and cleaning products with some very impressive demonstrations and hopefully some of you made some purchases and saved your prized trainers from the wet weather most of us experienced when we eventually left the event. We were lucky enough to have the opportunity to have a little one-on-one time with Jason Markk himself, so keep an eye out for our interview with him coming very soon. ROPES LACES were selling every colour you could possibly need as well as their three limited edition laces made in collaboration with Crepe City. Both Cracked Hatchet and Helen Hale Art provided something a little different with their candles in the shape of your favourite trainer silhouettes; great for those romantic dinners. As always the artists were well represented, with Piantoni, Kwills and Dan Cordas among others displaying their talents.

If this wasn’t enough there was an extra buzz created by the attendance of the magician known as Troy, along with a film crew from Channel 4. Throughout the day Troy was baffling Crepe City goers with his magic and leaving us asking, “How did he do that?”.

Getting back to the shoes, we were really pleased to see a great variety of shoes being worn on-foot, despite the bad weather. There was everything from vintage, retro-runners, skating and basketball trainers all the way through to high fashion. We have included a very small selection of on foot shots of some of the ‘lesser-spotted’ trainers we managed to catch sight of as we were walking around. We hope the diversity of the pairs being worn continues, as this is a big part of what makes this culture so great and why we do what we do.

Congratulations and thanks have to go to the whole Crepe City team for the huge amount of work they have put into this event and everything else they have done for trainer culture here in the UK over the last five years. Long may it continue! 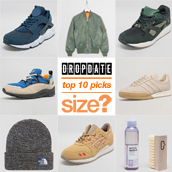 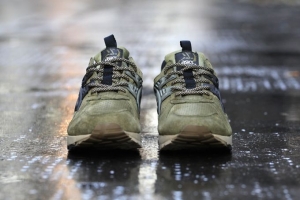