Many times, it looks like a simple case of taking an element (a midsole unit or a lacing system, for example) that looked good on one shoe and adding it to another model. It adds a point of interest for aficionados to latch on to and introduces older models to a younger generation, but often with variable results.

Just because something works well on one model, that shouldn’t mean that it’s open season for mixing and matching without a valid reason. The results are always a source of online debate.

Some models work well – and some simply don’t.

360 sole units on an Air Max 95 or 97 never felt like too much of a deviation from what we all know and love, but even the most open-minded individuals struggled with seeing multiple bubbles on a Footscape Woven.

Fusing high tech with low tech is interesting, but it shouldn’t always be at the expense of the aesthetics. Air Max 90 boots looked OK, but these were soon filling bargain bins throughout the UK, so they clearly didn’t register with the customers. The boundary between running and trail shoes is rapidly decreasing, which makes sense, and a lot of skate models have reappropriated existing shoes originally intended for something else altogether.

Blending an Air Max 90 with a Current and sprinkling a little Huarache into the bowl resulted in a great shoe from Nike and the always-creative Dave Ortiz. On paper it sounded like a mess, but the final results looked great and were extremely comfortable. The full name of the co-lab is still a tongue-twister though!

Some of the vintage prototypes floating around online are interesting (Huarache 180s or Pegasus BWs anyone?), but we liked the Air Current with the 180 sole unit that someone cleverly mocked up a few years back.

Thanks to Jordy AKA Cutch for letting us know he was the originator of the concept.

Some people at the brands certainly pay attention to some of these suggestions: perhaps it was simply a coincidence that the Air Huarache Burst appeared a year after one of the OG Crooked Tongues staff members posted up a Photoshop concoction on the CT forums. Or perhaps great minds think alike!

The perfect example of a hybrid, the Huarache Burst worked well as it added a little extra comfort to the sole of a something that was already comfortable on the upper. And although the visible air unit from the Burst is reasonably bulky, its addition didn’t spoil the slick shape of the Huarache Light.

Quickly established as a winner, the Huarache Burst showed up in a number of colourways, including a personal favourite of mine, the AD21 co-lab with its bright fluoro yellow, blue and grey blocking.

When the Festival of Air reached NikeTown London in August 2006, I remember being overwhelmed by the multitude of models in the One Time Only series. Jesse Leyva talked us through the concept – basically utilising new technologies on favourite models from the past – whilst the wall behind him was filled with some interesting footwear.

The 360 sole was an interesting choice for a donor. It felt like the Nike Air concept had reached its pinnacle, with the all-around-the-midsole windows pushing what we’d known and loved from the Air Max 87 onwards. Like diamonds on watches, the more there were, the better the shoe, right?

Well, that was a matter for debate. Seeing so many classic uppers adorned with the greenhouse effect below was certainly interesting. Looking back now, it marked previously uncharted territory, at least for the eyes of the consumers. 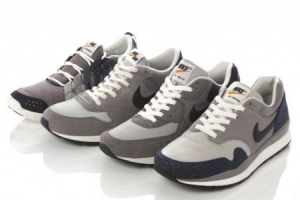