Since the first pictures of the samples emerged a month or two back, there’s been a fair amount of talk about the LE COQ SPORTIF FLASH – the latest limited edition offering from the French brand. Some of it was good talk, some held their tongues, and some of the comments were just outright rude, niave and arrogant, but you learn to expect that from certain quarters.

Granted, the early images didn’t do the shoe justice, but they were pictures of the over-stuffed samples, and the final amendments had yet to be made before they went into production. There’s no place for crap pictures in this game, as they can kill a shoe before it’s even had a chance to live.

So when we got our hands on them, it was only right that they should get the love they deserve, and we think that these images tell the real story of the FLASH – a fantastic shoe, that quality-wise, kicks the arse of a large percentage of this years releases, and that kids, whether you like it or not, is a fact. When we posted a couple of shots up on our Instagram feed a little while back, the love was most definitely there, concrete evidence that strong images of good shoes, breed good vibes.

It’s fair to say that although the shape is excellent, it does differ slightly from that of the 1990 originals. We’ve never actually seen a pair in the flesh, but have a lovely original sales catalogue to reference against. The manufacturing process is different now, and it’d be a big ask to get them 100% true to the originals, but by working from an original pair that the brand managed to get their hands on (nope, they didn’t have them tucked away in a secret archive vault somewhere, they were supplied by a collector) they’ve done as good a job as can be expected, with the tools they had to hand.

The materials are great, a premium mix of shiny nylon for the upper, lush suede for the overlays and a solid EVA midsole, that gives a well distributed spring when on the foot. The colourways both reference the originals and although the tongue label differs slightly, at a glance you’d be hard pushed to notice the difference between the old and new.

In an age where the majority are evidently brand conscious, rather than lovers of a good product, it’s always going to be a tough sell, but if you can rise above playground politics, then you’re the type of owner the FLASH deserves. And if they really are that bad, then why is it that three of the UK’s best purveyors of limited edition sports footwear, FOOTPATROL, CROOKED TONGUES and HANON are stocking them? The simple answer to that, is that their buyers know a good thing when they see it, and in a time when air bubbles and overhyped basketball reissues are the standard fodder, these awesome make-ups are a more than welcome break from the current monotony.

The LE COQ SPORTIF FLASH in the Grey / Turquoise and the Grey / Purple colourways are set to drop with the above-mentioned stores, in very limited numbers, in the next couple of weeks, and we’ll have them up on our RELEASES page as soon as they do. 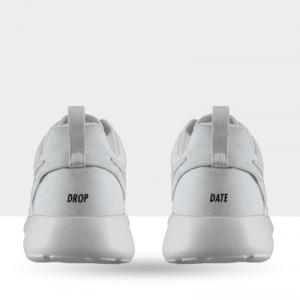 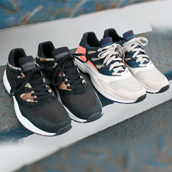