Since being let out of the archive last year, the LE COQ SPORTIF R1000 has blessed the feet of those in the know with a great OG colourway release, and some fresh new makeups. For Spring 2014 the French brand continues to dish up the flavour with another two colourways of their classic 1990 tech runner.

It’s safe to say we became overnight fans of the R1000 when it dropped last autumn in it’s grey and lime OG colourway. Granted it wasn’t a shoe we instantly recognised from its original release, but the look and feel screamed 90s running, the colourway was a banger, and the attention to detail was superb, with Le Coq rebuilding the shoe from the ground up based on a vintage pair to help ensure they kept that classic wedge shape. In today’s age of banana shaped retros and sloppy remakes we can’t praise this approach highly enough, and it definitely helped the R1000 stand out in a crowded marketplace.

After Le Coq went to so much effort to bring the shoe back, we were pretty certain it would be making further appearances in 2014, and thankfully we were right – fresh for spring ’14 come these two colourways that prove the old cliche that if it isn’t broke – don’t fix it. Both look suitably 90s and do their talking with good old fashioned great colours, rather than a collaboration partner, novelty materials or gimmicks.

First up is the grey/purple/lime version – whoever was working on the colour blocking got it very right with these, balancing the white midsole and heel counter with splashes of purple to frame the black and grey upper, then topping the whole thing off with a lime sockliner and eyelets. It’s a hell of a palette that reminds us of 80s Decepticon toys, which is never a bad thing!

The second pair of the duo evokes a Nike comparison, using a colourway reminiscent of the classic ‘medicine ball’ Air Trainer IIIs. Clean white mesh mixes with black synthetic suede and earthy blue and ginger tones on the toepiece and heel, highlighted with some bright orange pops, again from the sockliner and eyelets – it’s a striking combination. Combine these clean colourways with the great shape and lightweight build that remains in place from last year’s models, and we think the Gallic brand has got a winning duo on their hands. On foot we had to go with the ginger and blue combo, those colours working perfectly for spring – but it was a close fought battle!

With this drop, the LE COQ SPORTIF R1000 has just gone up another notch in our estimation – no hype, no tricks just great footwear. Available now from URBAN INDUSTRY, via the link-through below. 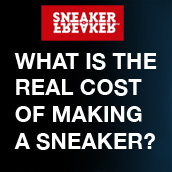 SNEAKER FREAKER: WHAT IS THE REAL COST OF MAKING A SNEAKER?
Previous