Mark Ward shouldn’t need introducing – his work for Nike, Stussy, New Balance, Sole Tech, Foot Patrol and many other top-level clients have made his work highly covetable. Aside from his unique and recognisable illustration style, his use of subtle colours and clever contrasting have resulted in some amazing shoes over the years. Remember the amazing Foot Patrol Epics? Yep: that’s Mark’s handiwork right there.

The Art & Sole screenprint series is an ongoing project featuring specially commissioned artworks by leading artists and designers from around the globe. Previous artworks in the series have included Sole Inspector by James Jarvis, Totem by Kustaa Saksi, The City by Ben Drury, Beer, Waffles and Nuts (in collaboration with Nike) by Jiro Bevis, Elevation by Geneviève Gauckler and Never Knot by Darcel Disappoints.

‘Tongue Tied’ is the seventh piece in the series : printed onto a textured paper using a fluorescent water-based ink, ‘Tongue Tied’ is a humorous play on the visual language of sneakers, and the amount of time people (including us – and, more than likely, you too!) spend talking about them.

Each print is a limited edition of 50, emboss stamped, and signed and numbered by the artist: they’re going to be popular and very collectable, so head over to the Art & Sole site, read the accompanying interview – and then quickly grab one from the store here before they disappear for good! 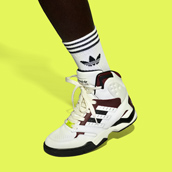 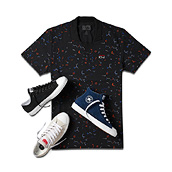