The New Balance 576 is deeply important to the Crooked Tongues narrative. These ‘Cutting Room’ editions help thicken the plot. The 1988 running classic (supposedly made from 675 components) developed a life of its own by the late 1990s when it became a bestseller alongside the 572 (a far less memorable shoe).

When we collaborated with New Balance in 2004, we were definitely taking a step into the unknown and this model seemed like the logical choice for a reworking. What worked in say, Japan, wouldn’t necessarily work in the UK. We’re inclined to think that it was a successful project for all concerned. So this is the model that started it all. The anniversary editions from 2008 were masterpieces of Flimby construction and they’re getting a deserved re-release soon, but there’s still more tales to be told with this model. We’ve had pubs, Olympic talk and some local tales using the 576, but this takes it to the source. 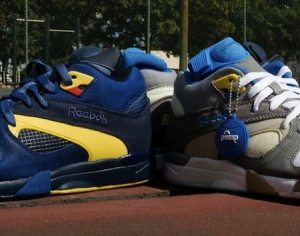