Fresh out the kitchen of New Balance’s UK Factory in Flimby comes the latest evolution of the 1500 series – the M1500TWS.

There’s not much we can say about the 1500 that hasn’t been said before – released in ’88 at the top of the NB performance tree, the shoe hit the headlines due to the whopping $160 price tag, and stayed at the cutting edge of the NB range through until the mid 90’s. beyond that it’s remained a crucial model for those in the NB know, combining a classic mixture of suede and mesh in the detailed upper panelling, and all of NB’s best foam innovations in the triple-density Evathane and ENCAP midsole.

Most 1500 hype over the last ten years has been down to special editions – The 1500 has proved to be the perfect blank canvas for a stack of collaborators to get busy on, with spectacular results – shouts to Solebox, Crooked Tongues and Hanon for mastering the art!

For 2013 Flimby has decided to generate some heat on it’s own, dropping the 1500 in a colourway similar to the hugely sought-after Air Max 1 ‘Curry’ – sample photos at the start of the year stoked the appetite of the NB hardcore, especially as the shape looked much improved after a few years of ever-fatter toeboxes on the UK models.

So now they’ve arrived, and we’re not disappointed! There’s still a lot of discussion about the shape, but it’s clearly much better than the last few seasons. The ‘curry’ suede is a thing of beauty, deep and bold, and a perfect complement to the dark silver mesh. The crisp white of the leather sections and midsole round out a clean, well built package that’s an absolute banger for spring and summer.

The accompanying all-grey NEW BALANCE M1500GWS that’s dropped alongside the M1500TWS is no slouch either, bringing more tonal goodness to the table – perfect if curry’s not your thing and you prefer something milder! Both pairs are available now through our RELEASES page and can be found via the click-throughs below. 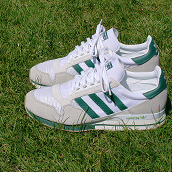