Arguably one of, if not the most anticipated shoe to drop in modern trainer times, the NIKE AIR HUARACHE LE in reissues of two original colourways – Emerald/Resin and Royal Blue/Pink – are set to arrive on your feet on Friday 22.2.2013. Well, that’s after they’ve crashed servers, overheated the internet and generally left a trail of virtual destruction in their wake – like all of the best releases should.

The Huarache Hypetrain has been a staple part of the market for years now, but really stepped up a gear when a limited number of two exclusive colourways dropped with a large high street retailer back last year – tester anyone?. This indicated that the manufacturing process for one of the most loved and recognisable Nike runners from the early ’90s had awoken from it’s lengthy sleep and was ready to get back to work on everyone’s favourite Huarache.

First released back in 1991, a year when most pairs in circulation were pretty much rendered unwearable within a few months after countless nights spent at illegal free raves and warehouse parties, the running trainer influenced by the native sandal of the same name, due to it’s fit, became an instant classic that was way ahead of it’s time. But after the amazing ‘Limited Edition’ releases in ’92 with their dark autumnal colourways and premium nubuck uppers, the Huarache simply vanished, and only resurfaced again in 2000 after an eight year hibernation.

From what we can see from the pictures below, although lacking the original use of materials, sleeker toebox shape and one or two other minor details of the original silhouette, the shape, construction and overall quality dont seem too bad at all. The colourways, which will never be truly exact to the original releases, are close enough and it looks like they may not be as difficult to pick up this time round after all, too.

As always, we’ve got all the confirmed information on the drop over on our RELEASES page, and just click on the images below to check out who’s stocking both colourways of the NIKE AIR HUARACHE LE when they drop on 22.2.13. 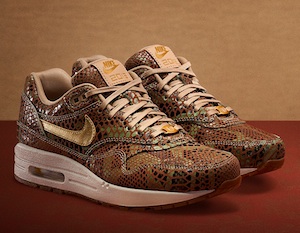