This Saturday 10.8.13 sees the latest colourway of the NIKE AIR HUARACHE LE drop with SIZE? both online and in-store as a GLOBAL EXCLUSIVE. Originally touted as a UK exclusive, it has been confirmed this morning that the retailer will have global exclusivity on the Grey / Royal /Pink colourway this coming weekend.

A week later, on Saturday 17.8.13 we see the second NIKE AIR HUARACHE LE pictured, the Navy / Royal / Green colourway drop through a wider distribution. Although neither make-up has anything to do with the recent NIKE X SIZE URBAN SAFARI PACK, the similarities in both colourway and materials are there for all to see and that may well have been a factor in the retailer snagging the Pinks as an exclusive.

After the success of the two original HUARACHE LE colourways that got a reissue back in February, we’ve been pretty disappointed with the other releases that have dropped with a certain high street retailer, so it’s great to see one of our favourite shoes of all time (and we’re not alone on that) getting a release in a couple of colourways that actually have some character to them, rather than something that’s looks like it’s been put together to fill shelf space.

The Elephant print and mesh toebox are highlights for us and the fact the shoe still weighs in at the sub 100 quid mark tells us that neither colourway will hang around for long. The NIKE AIR HUARACHE LE in the Grey / Royal / Pink colourway drops this Saturday 10.8.13 with SIZE? as a GLOBAL EXCLUSIVE, with the Navy / Royal / Greens dropping a week later on Saturday 17.8.13 through a wider distribution.

As always we’ll keep you up to date on developments and have you linked through directly come the drops, so make sure you’re following us on TWITTER, FACEBOOK and INSTAGRAM if you don’t want to miss out on two of the strongest NIKE AIR HUARACHE LE drops of 2013, thus far. 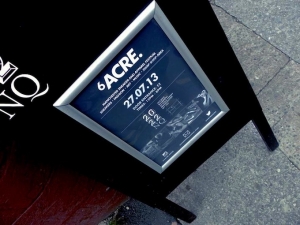 6ACRE KICKS FESTIVAL ROUND UP
Previous