Ask any fan of the Air Max line what their favourite colourway from 1987’s original drop is and chances are you’ll hear either ‘Red’ or ‘Blue’ – and no surprise, those bold colours on that classic suede and mesh panelling have become even more iconic than the building that inspired them, Paris’s Pompidou Arts Centre.

Then we have the AIR MAX 1 OG DARK OBSIDIAN – this original ’87 colourway that combines both navy blue blocking and bright red hits has been overlooked through the years,  and as a result it’s become a much rarer shoe, but it deserves the utmost respect – after all, it’s still one of the granddaddies of the visible air family!

The hype has been building for these since teaser shots of samples showed a lush suede mudguard in Dark Obsidian, upper panels in a weathered grey suede, with the hits of University Red topping the package off. Reckless talk of doubling and tripling up for the future ensued as the drop date inched closer… but somewhere along the line the plan slipped up. The long-nap suede got swapped out, and the release version went back to the felt-like synthetic suede that we’re used to seeing on the AM1, using it on all non-mesh sections of the shoe – the same thing happened with the University Red ‘OG’ version a couple of months back.

So did Nike hit or miss with these? Those who can’t live with the current AM1 toebox may not be convinced, as it’s a good 3-4mm taller than it was three years ago, however the overall shape of these ‘OG’s is better than most other current AM1s, and they look much better on foot than on the shelf. Whilst the quality of the materials won’t blow you away, there’s a good chance the colourway will, as the deep red teamed with the very dark blue looks even better now than it did in ’87 – that’s why we predict a mad rush for these from both Max collectors and those looking for a classy break from the wild colours and animal prints of recent AM1 drops.

With the Ultramarine 180 recently released and the Persian Max BW just weeks away, Nike continue hitting us with an onslaught of ‘OG’ models. The NIKE AIR MAX 1 OG DARK OBSIDIAN has now landed, and can be found by hitting the click-through below. 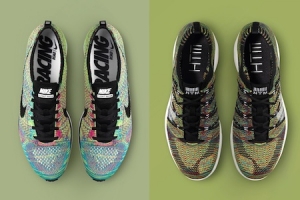