History indicates that we will always prefer the original versions of most sneakers, but if anyone is going to try and push things without destroying our rose-tinted specs, it’ll be the people at Nike. Whilst we weren’t overly convinced by developments such as the addition of the Free sole unit to the recent Huarache Light retro, other things have worked very well. Some of the Hyperfuse applications have been very interesting and we’re no longer averse to Flywire or Lunar embellishments to some of the most iconic of silhouettes. But, to be fair, anyone that messes with the Air Max 95 is going to have a hard job to convince anyone who grew up with the original that it’s an improvement. So what’s this NIKE AIR MAX 95 EM all about then? The EM system (that’s Engineered Mesh, in case you were wondering) makes for extremely lightweight uppers, as everything is reduced to perforations and clever profile tweaking. For functional purposes, it seems to make sense, but what does it do to the aesthetics of a classic model such as the Air Max 95? Well, in this example (and the Honolulu versions that we’ve also seen around), it works. The use of the grey and neon is always going to work, no matter how different the construction is, and although we’ve lost the tonal stripes on the outer panels, there’s enough interesting stuff happening with the ribs and details on the mesh to keep things looking good. The Air Max 95 never looked like it cared too much about weight when it originally dropped – there were many other lighter models around at the time – so it’s interesting to see it tick the box this time around. We like these.

The NIKE AIR MAX 95 NEON EM is available now, and the confirmed UK stockists list can be found by clicking the image below. 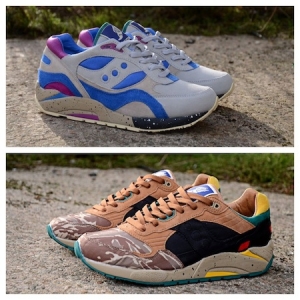