To celebrate 25 years of the iconic AIR MAX, and the continuous evolution of a collection of classics, NIKE has partnered with five London creatives to launch ʻAIR MAX REINVENTʼ.

The artists each focused on reinventing one of five classic Air Max models and were provided with additional inspiration through a rich archive of vintage brand campaign and cultural London- centric materials. The result is five unique interpretations of the Air Maxʼs journey from running revolution to cultural icon, available to view at a free exhibition in Londonʼs Hoxton Arches and collated into a limited edition Air Max Reinvent fanzine.

Animator Matt Box has reinvented the Air Max 1, the first shoe of the Air Max family released in 1987. Taking two vintage Air Max 1 adverts to inspire the beginning and the end frames of his work, Matt has created a hand painted watercolour animation that demonstrates the development of the Air Max 1 from an 80s running shoe to a sneaker icon in modern culture. His work illustrates how the style of the shoe has remained the same since 1987, while everything in London has continued to change. Set design and photography duo, Bruno Drummond and Gemma Tickle, have reinvented the original Air Max 90. The Air Max 90 was famously adopted by the London Rave scene, so Bruno and Gemma have taken the easily identifiable shapes, panels and textures of this model and turned them into a colourful, energetic composition that highlights the design and cultural resonance of the shoe. Their final piece mimics the bold colour pops and graphic language used in 90s rave flyers.

Stylist and set designer Rosy Nicholas has reinvented the Air Max 95, which has striking and unmistakeable aesthetic, elements of which were inspired by the human body. Referencing the distinctive grey gradients of the original shoe, Rosy has created a small-scale London cityscape that incorporates parts of the body as well as expressions of London architecture in 1995. Illustrator Oscar Bolton Green has reinvented the Air Max 97. The silver metallic aesthetic with reflective piping was influenced by the design of the high-speed Japanese bullet train. Referencing the shoeʼs futuristic visual, Oscar created an illustration that fuses London iconography from 1997 with the technology of Japan that inspired the original. The piece features a traditional Japanese bullet train riding on a Union Jack, and also references a London transport seat textile, which was designed shortly before the release of the shoe. Each of the five unique designs will be displayed at the NIKE AIR MAX REINVENT EXHIBITION at the Hoxton Arches, Arch 402 Cremer Street, London, E2 8HD from Friday 29th to Sunday 31st March 2013 – 11am – 6pm. Attendees will also be able to take away their own copy of the limited edition fanzine, which will feature a one of a kind, hand painted still from Matt Boxʼs Air Max 1 animation. 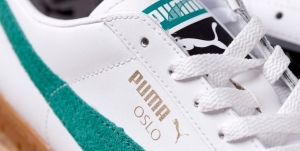 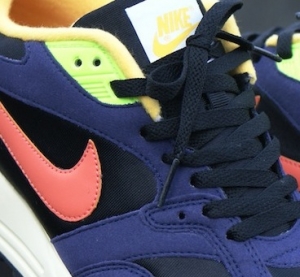