As fans of the original Nike Footscape, we were nervous when we heard that the base model was going to be manipulated and progressed beyond the original design from 1995. The monotone-and-rainbow HTM editions from 2012 were one of the best shoes of last year, with the two wild colourways making them stand out on the shelves and guaranteeing that they would disappear quickly. Looking at this latest incarnation, we needn’t have worried so much.

Aesthetics aside, the Nike Footscape Woven Chukka is a very wearable piece of footwear. The Neoprene collar is as comfortable as you’d expect, and although the toe section has slowly been narrowed over time, there’s still plenty of room up front. The original Footscape design catered for wide-footed runners, but as the model found success off the running track, the whole footprint has gradually become more tapered. The first version of the Footscape Chukka seemed less refined than the modern version, as the Freemotion midsole added contours in the right places. The sole unit might look substantial, but it’s light and functional.

Muted colourways with eye-catching accents work wonders and the Night Stadium grey uppers look smart, with the ability to conceal marks and dirt easily. But it’s the clever addition of the tan woven section and the fluorescent orange detailing that will be moving these off the shop shelves and onto your feet. Despite having a lighter and thinner upper than many other shoes, these fit true to size. They’re too good to cover up, so we recommend picking up an extra pair for the summer months, when you can wear them with a pair of shorts.

There are a couple of other colourways set to drop shortly, too – a nice Flat Gold version contrasts with a stand-out Red Reef edition, which we hear is rumoured to be a JP exclusive – but we’ll take these Quickstrikes in the meantime! To see which UK Stockists are carrying the Nike Air Footscape Woven Chukka in the Night Stadium colourway, hit the click-through to our RELEASES page here… 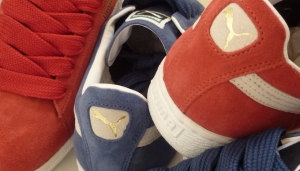