Since the Huarache’s comeback last year it’s been on a crazy rollercoaster of hype, with OG colourways and exclusive editions alike flying off shelves and crashing servers all over the shop. But while the Huarache has clearly amassed a huge new following, it could be too much of a good thing – have we seen too many of these? Or will the latest drop in the form of the NIKE AIR HUARACHE LE COOL GREY and NIKE AIR HUARACHE LE FLINT SPIN capture some of that early ’90s magic?

The Huarache LE. A Tinker Hatfield design masterpiece that is as comfy as it is weird, and as functional as it was ground breaking in ’91. Inspired by an odd mix of Mexican sandals (from which they get their name) combined with wetsuits and waterski boots, the Huarache felt and looked like nothing before it – no wonder it’s stood the test of time. However, it’s got to be said that none of the 2013 versions had the same clout as some of the mid-2000s colourways, and with most new versions of the shoe suffering from cheap-looking materials and glue stains, and the shape getting ever more bulbous at the front, we had a case of Huarache fatigue.

Thankfully with this latest drop Nike’s gone a bit closer to the root of the shoe, dropping two wintery versions which evoke the days of the Huarache crossing over into ACG territory with the Air Mowabb and Air Escape, and the legendary colourways they spawned. The Sand/Black version looks suitably outdoorsy in that classic Timb-boot tan shade, and could almost be a Nubuck remake of the rare OG Chestnut Brown pair, whilst the Cool Greys (pictured here) look seriously like smaller brothers of the 2005 grey Mowabbs – which are an all-time favourite of the team here at the Drop Date!

So yes, we’re big fans of these colourways, but we’re also pleased to report that the materials are a cut above recent releases too – especially the supple long-nap suede of the grey pair which is buttery good. What about the shape? We’re not going to lie, that toebox is still definitely roomier than it should be, but the soft upper materials mean that these look a lot better on foot than recent leather or stiff nubuck versions.

When it’s all said and done we were prepared not to like these, but all hype aside they’ve completely won us over, kicking off what is definitely going to be another big year for the Huarache. Stocks are limited on both so grab ’em while you can over on our releases page! The NIKE AIR HUARACHE LE COOL GREY and NIKE AIR HUARACHE LE FLINT SPIN are both AVAILABLE NOW. Hit the link-through at the foot of the post, for the confirmed list of UK stockists. 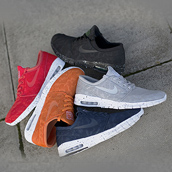 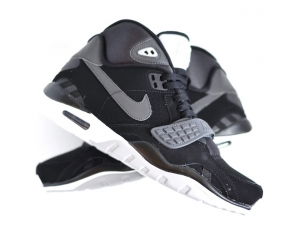