On these shores the Lebron signature line is pretty much marmite – either you understand the thinking behind King James’s footwear approach and appreciate the cutting edge tech, or you wouldn’t be seen dead in those crazy moon boots.  If you’re in the latter camp the NIKE LEBRON 11 KINGS PRIDE is unlikely to change your mind! From a performance point Lebron’s shoes have matched his on-court game over the last two years – unf*ckwithable.  While the Lebron 9 brought a first championship ring, an MVP award, and a slew of colours including Miami Vice themed ‘elite’ editions, the X took it up a notch (literally) with a super-high profile, huge Zoom Max unit, and a second consecutive MVP and ‘Chip. This means the XI has a tough act to follow even before we mention the cork and suede hype of the X EXT range – the good news that it doesn’t disappoint. ‘Bron’s line has always pushed tech boundaries, and the XI is the most advanced instalment yet, combining proven features in entirely new ways. Foamposite is combined with Hyperfuse to create a Hyperposite upper, while Zoom Air and Lunarlon combine in a removable midsole pod which promises to deliver the optimum balance between comfort and responsiveness.  The result is that familiar Lebron feel of tight fit and great heel lockdown, but with a quicker feel – lighter and more responsive without sacrificing the protection that has come to define King James’s range. Not going to play in these? You’ll be interested in the looks then.  Yes they’re clearly tech-led (looking like something Christian Bale might wear with a cape for an evening on the town) but Nike have done a superb job of making these distinctly Lebron, evolving the forefoot swoosh and angular design of the X, whilst also giving them some of that no-midsole aesthetic that’s familiar on foamposite shoes. This launch colourway is a banger, too – the bright teal outsole and highlights serve to frame some of the detailed touches, complementing dark metallics of the upper and the floral camo inner while contrasting against the pop the Flywire. The NIKE LEBRON 11 KINGS PRIDE is available now via the link-through below. Whilst there’s bound to be a ton of other colourways on the way, we can’t see many of them beating these, so don’t sleep – if you get where Nike is going with these stock up while you can! 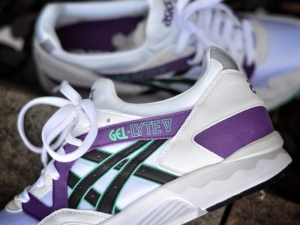