Popping up at the bottom of London’s New Oxford Street with a flurry of high-profile, star-studded events over the course of a short seven days, NIKE’S PHENOMENAL HOUSE caused quite a stir last week.

The Swoosh took up residence in The Sorting Office – a 40,000 square foot, multi-storey former industrial space – with the promise of colliding football, music, footwear and skateboarding in ‘the ultimate celebration of innovation’. The common theme of each event throughout the week was ‘risk’, with Nike eager to impress that without it there is no victory. In recognition of the faction of footwear obsessives with whom Nike are affiliated, Wednesday night played host to the Risk Your Sole event, which saw eight teams made up of retailers and industry legends put their prized collections on the line. A lengthy sneaker-battle buildup in the week prior culminated in a ‘winner stays on’ tournament on the mini pitch, with each team staking their claim for the prize. While the football was certainly the centrepiece of the evening, there was plenty to check out elsewhere—most pertinently the Genealogy of Innovation exhibition, which showcased a timeline of historical Nike silhouettes that all fed into the design of their new top-tier twinset: the Magista and the Mercurial Superfly. There were some incredible, museum-worthy pieces on display including OG editions of the Pre Montreal Racer, Air Max 87 and Air Mowabb, plus a healthy collection of on-pitch footwear which brought back plenty of playground football memories. This stroll through Nike’s past led up to the present, with the first football boots to use Flyknit technology on display and available to test-drive. As the football tournament drew to a close, the points from the sneaker battle were collated with the wins on the pitch and newly-resident Sneakersnstuff were crowned victorious, giving them the choice of the other teams’ kicks or a ‘mystery prize’. The gamble paid off and the SNS team won themselves an all-expenses paid trip to Nike HQ in Beaverton, Oregon, as presented to them by a big-screen Tinker Hatfield. So who is going to be running the shop when they go? 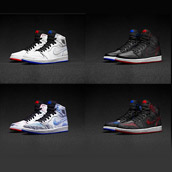