We’ve slowly watched the boundaries between skate shoes and mainstream sports footwear blur, which has resulted in some interesting creations over the past few years. Our friends at the Swoosh have pushed things even further with the new NIKE SB STEFAN JANOSKI MAX which looks like it’s the perfect bridge between the two disciplines. It was a masterstroke when Nike signed up Stefan Janoski to the SB program, and the basic Janoski model has become one of the best-selling skate shoes in recent history. Simple and stripped down, it’s a shoe that became just as popular on the street as it has in the skate scene. Using that model as a base for an Air Max shoe seems like a logical move – and the end result looks pretty damn good.

It will be interesting to see how much actual skating gets done in these, but they look perfect for chilling in and with that awesome Free sole and the Jacquard mesh upper, you can be guaranteed that they’ll feel comfortable on your feet. There’s a Koston 2 Free Max coming at the same time: watch this space for news on that one.

A strong selection of colourways of the NIKE SB STEFAN JANOSKI MAX are set to release with SIZE OFFICIAL and other retailers over the next few weeks so be sure to check back, and keep one eye on our social feeds for updates on the drop. 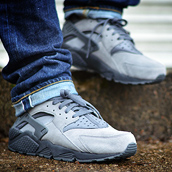