We’ve seen the upholstery patterns from the London Underground trains used in a number of different applications, but the NIKE x ROUNDEL AIR MAX COLLECTION takes things to the next level. Whilst the colours aren’t quite identical, the inspiration behind these schemes comes from the interior seating on the District Line train carriages. Disruptive and loud perhaps, but certainly eye-catching! Time to coincide with Transport for London’s 150th anniversary, the familiar ’roundel’ symbol appears on the tongue for an authentic sign-off.

The uppers here are slightly different, depending on which model you’re looking at. The NIKE x ROUNDEL AIR MAX 90 JACQUARD uses a loomed Jacquard material with faux edges and lines that mirror the more typical shoe construction: we’re yet to see these in the flesh, but we’re translating that as an all-over smooth surface, perhaps similar to Hyperfuse technology.

The NIKE x ROUNDEL AIR MAX 1 JACQUARD uses the same Jacquard weave but sticks to the traditional cut-and-sew construction, with a stitch-and-turn technique on the overlay panels. Both models have no-sew Swoosh applications and eye-row panels to reduce the chance of anything fraying.

The NIKE x ROUNDEL AIR MAX COLLECTION gets an early release at a special kiosk at Piccadilly Circus station on SATURDAY 14th DECEMBER  at 06:00hrs GMT (yeah, you read that right) where you’ll also receive a special t-shirt and sticker. This super-early release will be followed by in-store drops at FOOTPATROL and DOVER STREET MARKET at 11:00hrs and then finally the 1948 store at 12:00hrs.

The NIKE x ROUNDEL AIR MAX 1 will also be available as a QUICKSTRIKE and the confirmed list of UK stockists can be found via the link-through below. 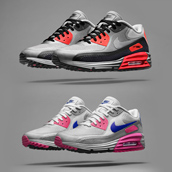