When NIKEiD first launched in 1999, we were genuinely excited at the news: create any Nike shoe, using an infinite range of options? Well… not quite, but that’s definitely proven to be a good thing. An open range of possibilities would have resulted in a horrible mish-mash of generic shoes and destroyed the appeal of some of our favourite colourways. And possibly made half of our friends in the Nike design department redundant. Instead, we’re presented with a well-curated range of products that are switched up in terms of materials and colour options. And as a result, we’re able to create some pretty amazing things.

One of the best things is that the options rotate. What’s available one month might not be around the next, so it’s well worth keeping an eye on the selections at all times. Special themed ranges often appear – at the time of writing, there’s the fantastic NIKE AIR MAX 90 EM NATIONAL PACK iD up – and clever colourwork can result in something that still turns heads years later. A perfect example was when the Nike Air 180 first appeared as an iD model (and the US-only reappearance in 2011 with speckled midsoles and perforated uppers was amazing). People liked the 180 retro shape and the iD colour options made for a perfect opportunity to play with the panels on this well-loved classic.

So, for our first look into the world of iD, we thought it might be fun to recreate a few old favourite colourways from years gone by. Creating a 1:1 replica of an in-line model isn’t really making the most of the opportunity, but you can get the basics pretty close – and things often look even better with a little twist thrown in. Anyone who remembers the Air Max 1 iD Clot co-lab will recall that it was possible to recreate a very rare and sought-after laser-branded hyperstrike (the options quickly disappeared once people cottoned on and tried passing off their own creations as the original pairs). In recent years, we’ve seen the introduction of premium materials such as elephant leather and safari prints, which has meant that some lovely running models could be made to accompany the original Supreme Dunks – a colourway that will always stand the test of time.

On that note, we tried our hands at a Supreme-esque NIKE AIR MAX 90 iD, with enough of the original shoe to make the visual connection, but with a little twist in the form of black elephant leather on the Overlay, a Light Crimson Midsole Wedge and some light grey eyestays. A bangin’ shoe, even if we do say so ourselves! Next up, we looked into our personal archives of favourite Air Max 90s and thought about giving the excellent (and strange) Sertig colourway an update. We’ve given this 2005 gem a modern-day sibling, using the NIKE AIR MAX 90 HYP PRM iD as our base shoe and mirroring some of the panel colouring. The speckled midsole is the perfect nod to the original shoe and we’ve gone for some yellow laces to compliment the original Mudguard panel. It would be crazy to ignore some of the basketball and Jordan options on Nike iD at the moment. We’ll be taking a trip onto the court again shortly (we’re itching to see what we can do with the LeBron 11), but this time we thought we’d grab a JORDAN SPIZIKE iD and play with some of the cork options available. Cork is primarily brown or tan, which had us thinking about ACG and Escape shoes from the archives. As we moved panel colours around, we left our original starting point, but place this Spizike alongside an Escape 90, Mowabb or even a Zoom Meriwether and you might see where we’re coming from. To round off this first chapter, we thought we’d mix disciplines yet again and went for the much-loved (and highly successful) Nike Air Rift as our moodboard shoe. Originally developed for the Kenyan running team (it’s named after the Rift Valley in Kenya), this unusual shoe was a serious gamechanger when it dropped in 1995. Instead of picking a lightweight running model, we grabbed the KOBE 9 iD and dipped it in the same colours as the original Rift. The result is a clean-looking shoe that evokes fond memories of hunting down obscure imported Nikes before the days of eBay made everything a bit easier. Have a look at some of the possibilities we’ve played with over the past weeks and give it a shot yourself. If you’re looking to create a matching pair for a particular outfit, then you’ll no doubt find something perfect amongst the current options. And the best thing is that if you don’t like what we’ve done, you can do a much better job yourself! Get involved over at NIKEiD right now… 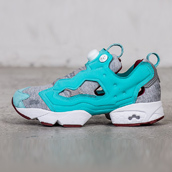 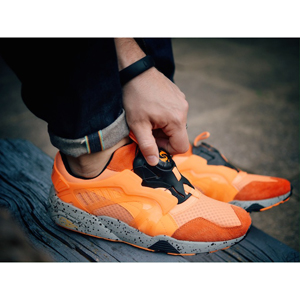