The Puma Suede silhouette is one of the most infamous of all that has transcended through the time and tastes of many cultures. Since their introduction in 1968 there have been many versions in numerous mock-ups, but these current Suede Classics are some of the best ones seen for almost 10 years. With their pointier toe box, flatter sole and re-worked formstripe, Puma has managed to almost emulate the best models released from the mid ’90s.

Puma have gone back to two of the original colourways first released with these red and blue Classics. Their entire Suede uppers makes them comfortable and form fitting. This factor gained them a huge following within the hip-hop and b-boy scene. Not only for their performance qualities but also for their effortless style attributes which still remain in place to this day. Offsetting the red and blue is the instantly recognisable Puma formstripe and white sole unit. The leather lining, gold branding details and slightly padded tongue add to their quality production. You’re given the choice of matching red & blue wide laces or thinner white alternatives: an option that isn’t regularly made available with many other trainers nowadays.

For years and still up until this day, people are searching for the early releases that they regretfully passed on from years gone by. If you’re looking to add quality Puma’s to your collection, take this opportunity and grab these while you can rather than trying to hunt them down once they’re long gone. Some may even be tempted to grab more than one pair to keep fresh and break out one day in the future. And unlike other brands and trainers they’ll still be completely wearable as if they were just purchased.

Check out which UK Stockists are carrying the PUMA SUEDE CLASSIC in RED here, and BLUE here. 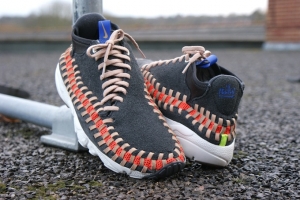