The PUMA TRINOMIC FLURO MESH EVOLUTION PACK is a definite head-turner and a perfect antidote to the grey skies we’ve had recently. What better way to embrace the forthcoming months than by dipping your feet in PUMA’s carefully concocted citrus flavours? With every brand hammering out their own take on the football theme this summer, these shoes approach the subject in a unique and considered way. The colours take their lead from the practice cones used by footballers to hone their footwork skills.

The PUMA XT2+ is a nice bridge between the gap of simple silhouettes and the uber-tech stylings of the PUMA DISC BLAZE – and the 3M formstripe keeps in with the look of the rest of the shoe very nicely. Reinventing the original specification of the TRINOMIC range from the ’90s, there’s also inspiration set by the FAAS range from the running archives, with a lightweight application on both medial and lateral sides of the uppers. Speckled midsoles and nubuck are the icing on the mesh-covered cake.

Both the PUMA TRINOMIC XT2+ and TRINOMIC DISC BLAZE from the FLURO MESH EVOLUTION PACK are scheduled to launch this coming SATURDAY 21.6.14 with the confirmed list of European stockists provided via the link-through below. 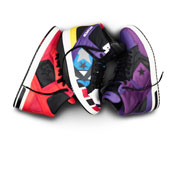