SLAM JAM is celebrating its 25th anniversary and as part of their celebrations they’ve joined forces with PUMA for this dual release.

Black and white are signature colours for SLAM JAM – and that’s the colourway they have applied on the PUMA XT2+ and PUMA STATES here. On top of a black mesh base, the XT2+ features 3M panels on the toe wrap and side stripe, whilst cream leather covers the lining. The States have been stripped back to the bare essentials with a simple upper finished in black leather and embossed Formstripe and dual branding on the lateral side. The lining has been removed to give more of a smart shoe style rather than a trainer, which really suits this silhouette. Both pairs are finished off with white midsoles and the specially-designed 25th anniversary logo on the tongue. This is the second of 25 projects that SLAM JAM have planned for this year, with a Carhartt WIP collaboration having been revealed already, so potentially we could see more great trainers from them later this year.

Both pairs from the PUMA X SLAM JAM 25TH ANNIVERSARY PACK launch at SLAM JAM on FRIDAY 27 FEBRUARY with a wider release scheduled for SATURDAY 14 MARCH. We will have all the info you need on the wider release up on our RELEASE PAGE closer to the time, so be sure to check back! 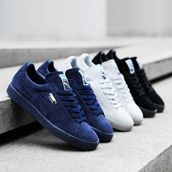 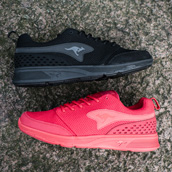