PUMA is launching its first collaboration with VASHTIE KOLA: a true renaissance woman and quintessential New York ‘It’ girl.

For those of you who haven’t heard of VASHTIE KOLA, she’s a multi-talented DJ, designer, filmmaker, artist, culture curator and trendsetter from New York, a city that PUMA has strong cultural links to. These links have been built through the various subcultures that embraced the brand’s pinnacle footwear models, such as the PUMA STATES. Pulling inspiration from the rich urban music and lifestyle scene of the city, the collaboration takes a trip down memory lane to the days of B-Boy culture, presenting classic styles such as the PUMA SUEDES and the PUMA T7. These have been reworked to sit alongside a range of ready-to-wear unisex apparel in a colour palette made up of black, gold and burgundy.

The PUMA X VASHTIE SS15 COLLECTION is scheduled to drop at OFFSPRING on SATURDAY 28 FEBRUARY and will be available via the link-through banner below. 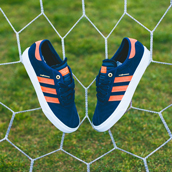