80 Berwick Street was barely recognisable last Thursday as it played host to to the launch of the REEBOK X FOOTPATROL CLASSIC LEATHER MID ‘ON THE ROCKS’. Cleared of all kicks (except the stars of the show of course), the shop floor was instead decked out in garish, angular 3D models that created an impressionist mountain landscape at knee height.

An orange miniature mountain perfectly sums up the theme of the collaboration: a focus on the aesthetic, rather than the purpose, of footwear; while FootPatrol’s creation derives influence from hiking apparel, the closest thing to a crevasse they will likely see was sat on the shop floor last night. It doesn’t matter that the kicks won’t make it to the rocks after which they are named because it’s how they look that’s important, and boy do they look good!

The hiking theme was extended throughout, with FootPatrol branded carabiners and Coors Light on offer (we’re ashamed to say we didn’t get the connection to the latter for a little while.) But as always our attention was drawn by the footwear on show and we weren’t disappointed.

Big thanks to REEBOK and FOOTPATROL for another solid launch event and the CLASSIC LEATHER MID ‘ON THE ROCKS’ is still available and can be found via the link-through below. 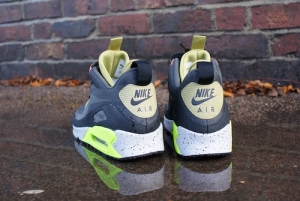