Saucony and Footpatrol’s first partner project is well overdue (quite literally as quality issues forced a six month delay in their release); the Massachusetts based outfit has extended its collaborative hand to some great retailers, to include an A-list of big hitters like Solebox, Hanon and 24 Kilates delivering some insanely good efforts – and the results have always been impressive. But very few more so than the eagerly anticipated SAUCONY X FOOTPATROL ‘Only In Soho’ SHADOW 6000. Dubbed the ‘Only in Soho’ project after the store’s West End location, the shoe is a tribute to everything for which Soho has gained notoriety. Originally an in-store expression thrown around to appreciate the peculiarities of the area, they have gone on to encapsulate these characteristics in their shoe. Rather than Frankensteining a fusion of two different models, as seen in some of Saucony’s recent collabs, FP kept the Shadow 6000 silhouette intact and worked to get the very best out of it. The shoe is drenched with references, starting with the sole unit which is flecked with black to reflect Soho’s grimy gutters and alleyways. The murky theme continues upwards, with a jet black suede upper punctuated by two shades of Soho’s trademark neon blue along the mudguard and heel section. More neon flashes appear with the clever application of 3M Scotchlite on the heel strip and 3 dot Saucony branding, red on the lateral side and blacked out on the medial. This asymmetry is seen on the eyelets as well, using the same red and blue neon hits, while the sockliner is swathed in black leather as a nod to the seedier activities that occur behind Soho’s closed doors. The woven tongue label featuring a mashup of the two brands’ logos is a masterful touch and caps the shoe off beautifully. Three lace options let you choose which part of Soho to allude to: blue for the flickering neon lights, a speckled black and red for Chinatown’s paper lanterns, or full black to stay in the shadows. Footpatrol have knocked out one superb shoe here and it’s most definitely been worth the wait.

The SAUCONY X FOOTPATROL ‘Only In Soho’ SHADOW 6000 dropped in-store last weekend at Foot Patrol, but they have just released the worldwide stockist list, and the shoes will be available at the following retailers from SATURDAY 16TH NOVEMBER:

As always, we’ll keep you up to date on all news surrounding this amazing shoe release, so keep checking back. 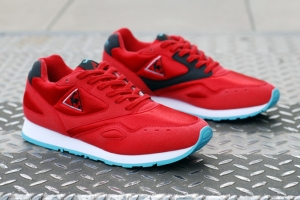 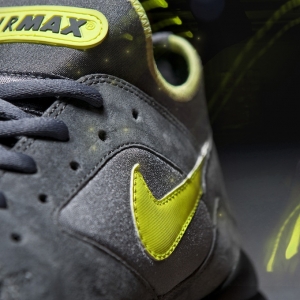