The SAUCONY SHADOW 6000 is a shoe that is getting a lot of mileage of late; premium general releases and collaborative makeups with Footpatrol and, most recently, Premier, indicate that this mid-80s era runner has become the Massachusetts brand’s frontline silhouette. Next to take on the Shadow 6’ is British retailer OFFSPRING, who present the SAUCONY X OFFSPRING “RUNNING SINCE ‘96” SHADOW 6000 PACK.

As Premier did with their release, Offspring have produced a terrain-themed double drop, although their inspiration is a little closer to home than the ‘Life on Mars’ project. They have drawn on the colour palette of Neal Street, the location of their flagship store, and combined this with some 80s-style neon pastel pops from Saucony’s archive. This mutual appreciation of each other’s heritage extends to the name of the release: an amalgamation of Saucony’s ‘We Run’ slogan and the opening year of Offspring Neal Street.

Accordingly, both colour-ups are suede-built and feature grey tones at their bases, albeit to very different extents. The predominantly grey pair use two different shades, making the likeness to the cobblestones of Neal Street a little more apparent. This contrasts nicely with the dark turquoise hits on the forefoot and heel and those neon pink dots on the midsection. The other pair uses the darker shade of grey more sparingly, preferring navy blue across the mudguard, heel panelling, eyestays and midpanel Saucony logo. Finally a light aqua strip snakes through the upper and wraps the heel. Both shoes definitely evoke images of pastel-coloured Easter eggs, so it’s fitting that they’re releasing at about the right time!

Beyond the colour blocking, there is a lot of nice detailing here: there are leather sock liners, colour-coordinated eyelets, and stitched Offspring and Saucony branding on the heel below a white Scotchlite strip, which gets further play on the grey pair. If that wasn’t enough reflectivity for you, both pairs get entirely 3M tongues, with a woven label that features each camp’s logo. A highlight on both pairs is that wedge-like sole unit, which is splattered three-ways, with black, pink and the corresponding shade of blue flecked across a white background. A lovingly crafted project is finished up with specially branded insoles and shoebox.

It’s no wonder the Shadow 6000 has become the number one in Saucony’s lineup when it’s possible to get the results to which we have been treated recently. The winding, curvy panel design on the upper (no doubt influenced by the curves of the Saucony Creek, as with the logo) lends itself to some truly creative colour-blocking opportunities, and these makeups are no exception. The hard bit is choosing between the two…good luck with that!

The SAUCONY X OFFSPRING “RUNNING SINCE ‘96” SHADOW 6000 PACK gets its EUROPEAN launch this SATURDAY 12.7.14. Due to the nature of the release, and the limited numbers available we expect the majority of stockists to drop theirs In-Store first, meaning the chances of picking up a pair online could be pretty slim. With this in mind, we suggest you start planning your trips now and keep an eye on their social feeds for updates, because we’ll not be shouting out any live link-throughs come the time, as we’re pretty sure there’ll be very little, if anything, other than a 404 at the end of them. 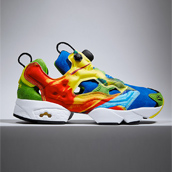