At last, the amazing SAUCONY X PREMIER SHADOW 6000 ‘LIFE ON MARS’ PACK lands here in the UK this coming weekend! We’ve had the telescopes poised for the arrival of these extraterrestrial delights ever since we saw the teaser images the other week.

Enough of the space puns: this is one of the best collaborations we’ve seen so far this year. The Premier skate store of Grand Rapids, Michigan worked with Saucony to create this Shadow 6000 pack inspired by Mars. We’ve seen a number of shoes with a space theme before, but this may be the first set of footwear designed with the red planet in mind. With a heavy suede body (for protection from the -80 degree temperatures), sturdy construction (to protect from the violent winds), the aesthetics are next level. The speckled midsoles and rugged tread are perfect for stomping through hostile terrain, from Mars to Milton Keynes. The base model was already faultless, but these two colourways definitely turn the heat up a notch or two.

There’s no need to make the 35-million-mile, 328-day journey to Mars to get your hands on a set: the SAUCONY x PREMIER SHADOW 6000 ‘LIFE ON MARS’ PACK will be available at a select number of UK retailers this SATURDAY 12TH APRIL which can be found on the RELEASE PAGE via the link-through below. 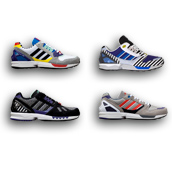