The PUMA BLAZE OF GLORY has been pretty quiet lately, but just when you thought it was safe to go back in the water… SNEAKER FREAKER and PUMA have wound the clock back five years and are about to bring back their 2008 Blaze of Glory ‘Shark Pack’!

Originally taking the form of two separate drops five years ago, bossman Woody and the crew at Sneaker Freaker pretty much put the Blaze of Glory on the map with this release.  Themed after one of their native Australia’s most famous aquatic residents, the Great White shark, the initial release saw the limited worldwide availability fail miserably to keep up with huge demand.  The team followed these up later in the year with the ‘Black Beast’ version which went down equally well, and the 30 ‘friends and family’ pairs finished in genuine wrinkled sharkskin just cemented the pack’s status in Puma folklore. These were more than just a good theme and decent colour options though, the Blaze of Glory (basically a Puma disc blaze without the clunky disc system) was an inspired and brave choice for a base model in 2007 – techy ’90s runners weren’t exactly all the rage back then.  The chunky full-length Trinomic cushioned midsole and bootie-style upper looked positively bugged out compared to the rest of the classic looking Puma range, especially as the Blaze didn’t feature the signature Puma formstripe.  The choice paid off though, as the pack delivered a totally fresh take on Puma collabs, ditching the classic (but predictable) Suede and Clyde models and still producing a shoe that not only looked the business and snapped necks, but that was also massively wearable and supremely comfy to boot; yup in true Great White style they killed it! For the re-release Woody has pushed things forward with some changes to detail and materials, (notably an embossed upper which makes the premium Nubuck look like that special sharkskin edition) but overall the shoe maintains the ingredients and quality that made the initial drop so special. This time there’s also a LTWT version too, using a slimmer build and part neoprene mesh-fused upper.  whilst they’re nice, it’s difficult to look past the beautifully foamy wedge-shape of that OG version, complete with fleshy pink and jugular red colour pops. There’s no doubt that both newcomers and those who missed out the first time will be thrashing around on the refresh button when the PUMA x SNEAKER FREAKER BLAZE OF GLORY SHARK PACK drops globally this coming SATURDAY 30.11.13 following its exclusive SNKRFRKR launch yesterday. As always, we’ve got you covered on the UK drop and full release info can be found via the link-through below. 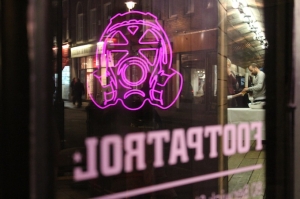 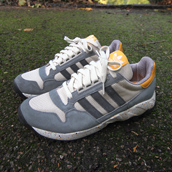