The SNEAKERSNSTUFF X ASICS X ONITSUKA TIGER ‘TAILOR PACK’ is the SNS way of dressing up! When SNS launched sixteen years ago, going out in the evenings required formal footwear – you weren’t getting into any clubs or bars with your trainers on. To flip that idea on its head, the opening party for their first store was called ‘Dresscode Sneakers’ – and no-one was getting in without a pair of sneaks on their feet!

The Sneakersnstuff x ASICS x Onitsuka Tiger ‘Tailor Pack’ is a nod to that era. The ASICS GEL-LYTE V has a clean off-white midsole, an army green synthetic nubuck upper and various sections rendered in tweed. The ONITSUKA TIGER SHAW RUNNER comes with a slick navy pinstriped upper (for that Saville Row look) and smooth synthetic nubuck panels, also in navy. And, just to add something a little something special to the release, there are some special bow ties included for the first few customers.

This is smart footwear, but not as you know it! The SNEAKERSNSTUFF X ASICS X ONITSUKA TIGER ‘TAILOR PACK’ launches at SNEAKERSNSTUFF on SATURDAY 31ST JANUARY, with a limited release at various retailers to follow on SATURDAY 7TH FEBRUARY. Both pairs will be available via the link-through banners below. 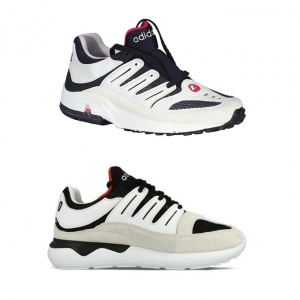