Last year was a busy one for SUPRA, a lot of focus was placed on the many different aspects within the brand, along with collaborating with a heavyweight line-up to include Solebox, SNS and Sneaker Freaker, as well as hooking up with Havoc and Prodigy, from the infamous, Mobb Deep. There was another hook up too, but lets concentrate on the good stuff for now…

Last year was also a year of exploration for SUPRA, the brand released their first lightweight runner in the form of the Owen. The shoe was very well received, and ticked all the right boxes of what a shoe in its class should be; comfortable, simple and wearable.

This year sees the release of the OWEN MID. The transition between the standard and the the mid-top is a fairly natural one, and because the materials and initial shape have been kept very consistent, it means that we’ve lost none of the comfort we’ve come to expect from the newcomer.

The debut colourway of the Mid is a very simple, full black upper with a block white midsole. The main material on the upper is a nice, smooth nubuck, with the toebox and side panels housing a thick mesh underlay. The ankle support comes in the form of a neoprene surround, whilst the most notable addition to the Mid version, aside from it’s height, is the solid rubber heel cup that surrounds the entire back of the shoe, which can only add to the strength of the already heavily supportive upper.

The sweetest detailing has to be the hits of 3M, woven into the zig zag bras that run along the side of the shoe, which we’ve always liked as a feature of the Owen, so running the 3M pops along it, just makes us like it even more.

The SUPRA OWEN MID is a solid release, and a shoe we hope to see a lot more of throughout the year, as it’s an excellent start to something that definitely gets our vote. Available now, the Mid is up on our RELEASES page and you can take a closer look below, then click on any of the images, for the confirmed list of UK stockists. 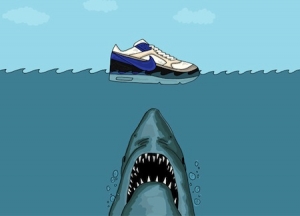 NIKE ILLUSTRATIONS FOR THE CHIMP STORE BY JOSH PARKIN